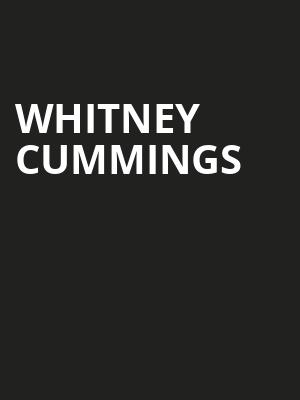 The 2 Broke Girls creator heads out on tour

Co-creator of 2 Broke Girls, podcast host and star of her own NBC show, the hilariously honest comedian Whitney Cummings is taking to the road once again. Expect an evening of laughter as this candid comic lets you into her sarcastic world. With past targets including workplace politics, co-dependency, relationships and more, nothing is off-limits for Cummings.

Riding high off her fourth hour-long special, Can I Touch It? released in July 2019, Whitney spared no time in adding to her already impressive CV. Shortly after its release followed the launch of her first-ever podcast, 'Good for You', co-hosted by Benton Ray. Catch the multi-talented comedian live near you soon!

And before you stop reading

You may be required to have had a COVID vaccine in order to attend this performance or show proof of a negative test. Please contact the venue directly for more information on this.

Sound good to you? Share this page on social media and let your friends know about Whitney Cummings at Paramount Theater Of Charlottesville.